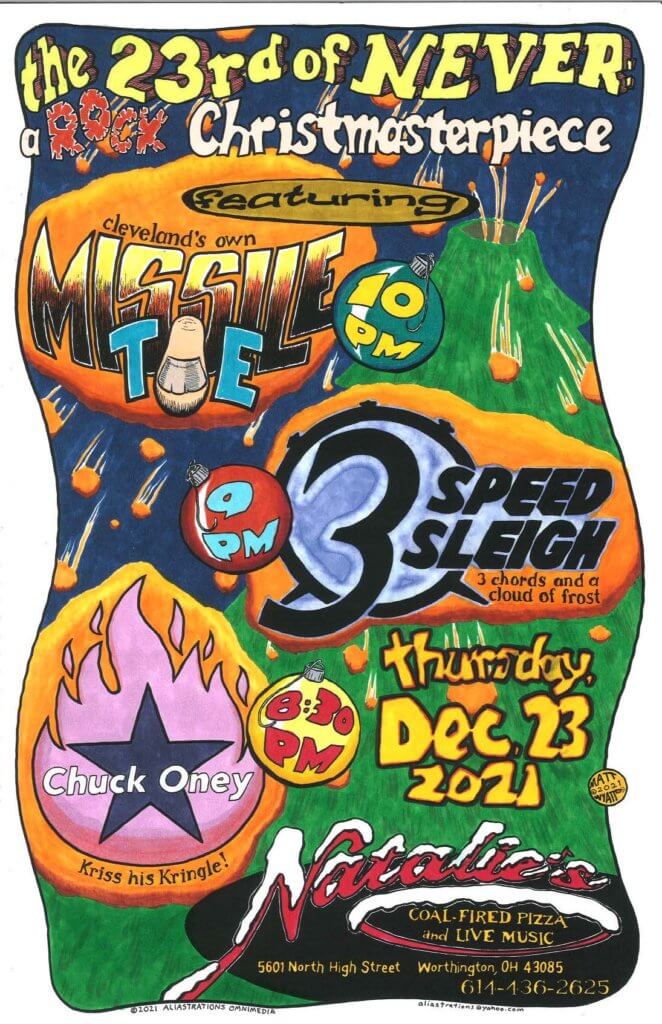 Celebrating the Christmas season in genre-slashing style are The 3Speeds with special guests Chuck Oney and Missile Toe! This show is presented with support from Used Kids Records, located at 2500 Summit St in Columbus, who will be providing coupons and giveaways for audience winners! First on, the 3Speeds (in their seasonal incarnation, 3Speed Sleigh) tear the wrapping off some Christmas chestnuts and roast them over the open fire of their punk rock flailing. Besides the Christmas songs of Slade, Ramones and the Damned, they have an original, “(I’m Waiting For) The Other Ball (To Drop)”, their paean to dreading the New Year. And their re-working of the Bay City Rollers’ “Saturday Night”, renamed “Hanukkah Nights”, has eviscerated audiences for 3 years running. Sing-along caroling books will be on hand for, well, singing along! Band members are Matt Wyatt (guitar, vocals), Gene Brodeur (drums), Eddie Blau (bass, vocals), and Chris Wyatt (guitar, vocals).

From the rusting toy factories in the Yuletide wasteland of Cleveland Ohio comes Christmas wreck rockers Missile Toe. Don’t stand underneath them!

Opening the evening will be Ohio Music Award winning singer/songwriter Chuck Oney, who started his musical career when he formed ONEY in 1987 & The Vague in late 1993. His latest album is Authorize Information.