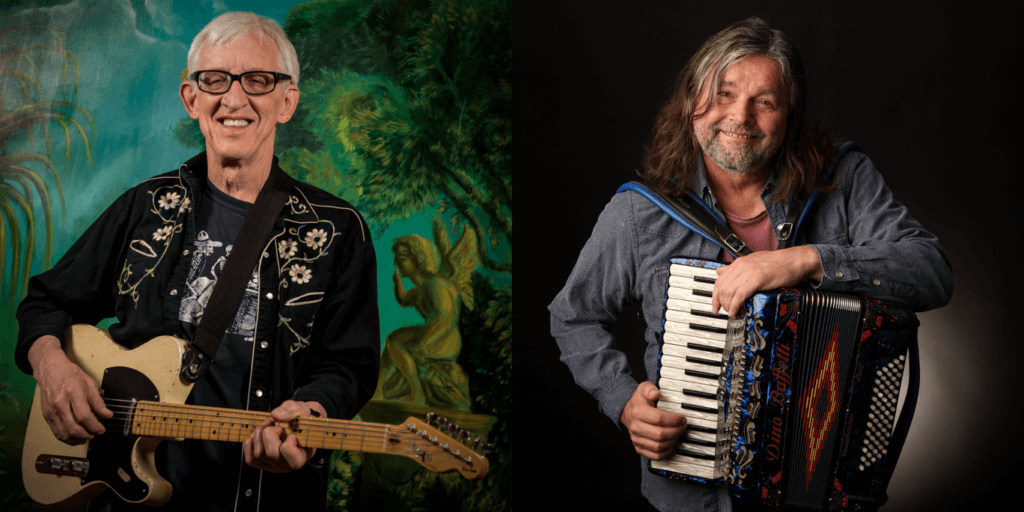 Bill Kirchen, founding member of Commander Cody And His Lost Planet Airmen and Radoslav Lorković, current pianist with Asleep At The Wheel join forces for a whirlwind midwest jaunt. Grammy nominated guitarist, singer and songwriter Bill Kirchen first gained national recognition as a founding member of Commander Cody and his Lost Planet Airmen. His trademark guitar licks drove their Hot Rod Lincoln cut into the Top Ten in 1972. He has released twelve CDs on his own, and played guitar live or on record with a who’s who of Americana and Roots Rock ‘N’ Roll, among them Gene Vincent, Link Wray, Bo Diddley, Hazel Dickens, Doug Sahm, Hoyt Axton, Emmylou Harris, Maria Muldaur, Dan Hicks, Nick Lowe and Elvis Costello. His latest recordings are The Proper Years and two 12’ vinyls, Tombstone Every Mile and Waxworks, all on Last Music Company.

Radoslav Lorković  is a Croatian born and classically trained folk and blues musician, known in particular for his flair on the piano and accordion. Rad is currently playing piano with Asleep At The Wheel, and has recorded and performed with Odetta, Jimmy LaFave, Shawn Mullins, Greg Brown and more, His 47 year career as a touring musician has taken him around the world, where he has performed from castles in Italy to Carnegie Hall. He says he began his career as a Commander Cody protégée! Connect with Radoslav on his website.