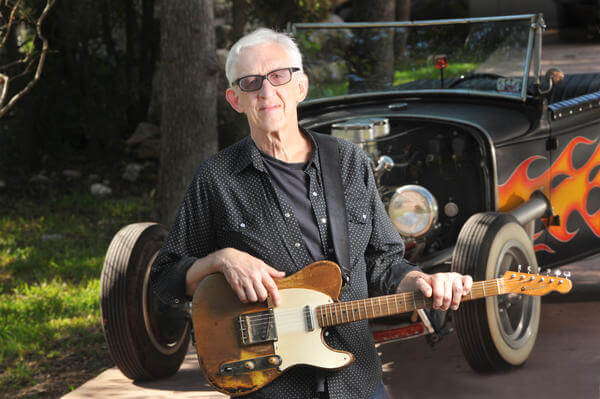 Forget the “Nutcracker” and “Handel’s Messiah.” For a real taste of seasonal cheer, nothing says joy to the world like Bill Kirchen singing “Daddy’s Drinkin’ Up Our Christmas.” Bill Kirchen and the Hounds of the Bakersfield make a stop on their annual Honky Tonk Holiday Tour at Natalie’s with a sleigh-full of rarely heard holiday numbers from the blues, rock ‘n’ roll and honky tonk bags.

Guitar Player Magazine dubbed Bill Kirchen the “Titan of the Telecaster.” Rolling Stone said he’s “an American treasure” and “one of our best.” No matter what you call him, Kirchen is a founding father of the Americana movement, now at the peak of his impressive career.

Kirchen was originally known as co-founder and lead guitarist of Commander Cody and His Lost Planet Airmen, and it was his scorching guitar licks that helped define their sound and drove their hit, “Hot Rod Lincoln,” into the Top 10 in 1972.

Bill is currently touring with his all-star, all-Texas band, The Hounds of the Bakersfield: Rick Richards on drums and David Carroll on stand-up bass. Richards has made records and toured with Ray Wylie Hubbard, among many others. This brought him to the attention of Ringo Starr, whose recommendation led to the last three stadium tours drumming with Joe Walsh. David Carroll has played bass with a who’s who of Austin artists, including stints with Billy Joe Shaver and Jerry Jeff Walker and a run with Ray Price.

Saturday’s show promises to be a night of telecaster mastery you won’t want to miss; let joy be unrefined!