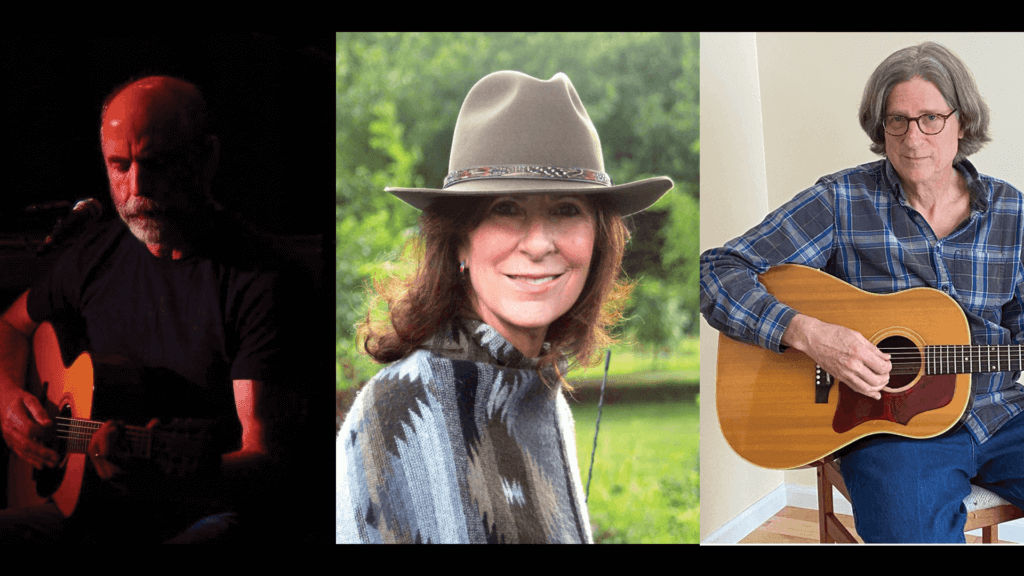 ***Please note: All shows at Natalie’s currently have socially distanced table seating, and masks are required except while eating and drinking at tables. Natalie’s presents a special night of music featuring Bruce Dalzell, the patriarch of the Athens music scene, Donna Mogavero, and Albert Rouzie. Dalzell is a craftsman, constructing delicate and thoughtful folk tunes that cut through all the pretense of the modern music industry to hit listeners at their core. Although his catalogue of tunes is not without dark or mournful underpinnings, his songs always glow out of that dark night, with soft but steady warmth. Among his many credits are appearances on “Mountain Stage with Larry Groce.

Donna Mogavero is a singer/songwriter and professional entertainer and activist, and her fourth and most recent Cd, The End Of The Drive, was released during the pandemic of 2020. Donna has been a staple in the Columbus music scene for over 4 decades, and she performs as a soloist or with her new Donna Mogavero Band throughout the year in numerous venues and festivals. Donna has won numerous awards over the years and she continues to perform and raise funds for many non-profits in Ohio. Her song “The Streets Where I Live” gave the listener a vivid description of life in the Short North and was used to promote and market Columbus, Ohio.

Albert Rouzie plays and sings a fusion of blues, folk, and country cooked down to his own flavor of Americana. His music is influenced by where he has lived–New Orleans, the North Carolina piedmont, the Pacific Northwest, Austin TX, and now Athens, Ohio. Ranging from the offbeat (freedom fighter chickens) to focused realism (a truck driver on the edge of despair) to love (Slowest Man in the World), Albert’s songwriting represents a broad spectrum of human emotion. His albums include Songs of Love and Debacle and, with the Wingnuts, Riding the Whirlwind. Stay tuned for his third album, which he is now recording at Peach Fork Studio in Meigs County.