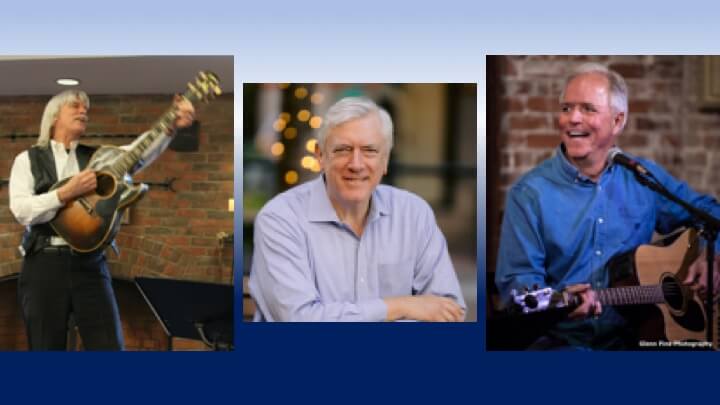 Natalie’s welcomes back Jasey Schnaars, Parker MacDonell and Keith Larsen, three dynamic singer-songwriters who will be performing “In the Round”! Schnaars is a Grammy-nominated, ASCAP Award winning singer-songwriter, and his first chart record was “Sing Me That Rock and Roll” for the Kansas City Jammers, and he later wrote Eddie Rabbitt’s Top-10 country hit, “Nothing Like Falling in Love.”

His song, “You Are Not Alone” helped the Washington Squares land a Grammy nomination for the best contemporary folk recording of 1987. Jasey has also written for radio, television and film. His instrumental composition, “Evolution,” is the theme song for the PBS television series, “Songs at the Center”, seen on more than 340 stations nationwide.

Parker MacDonell is a veteran of the LA club scene and college student unions across the US. He has shared the stage with Chuck Berry, Bo Diddley, Mary Travers and Christine Lavin. He’s a pioneer in the Columbus music scene, including a founder of Six String Concerts. His CD releases are Home to the Heart, and Looking for You.His recent CD project, “Miracle on Broad Street,” a collaboration with singer-songwriter Matt Munhall, received acclaim for both its artistic merit and its charitable endeavor.

Keith Larsen’s song, “Hold On,” won the People’s Choice Award in the Nashville Songwriters Association International/Country Music Television songwriting competition. He is a two-time selection to Songwriter Serenade, and recently headlined a solo concert at the prestigious Blue Rock Artist Ranch and Studio, in Texas. He also appeared in the premiere season of Songs at the Center. Drawing from his years as a firefighter, Keith merges straightforward vocals with image-driven lyrics that resonate with honesty.