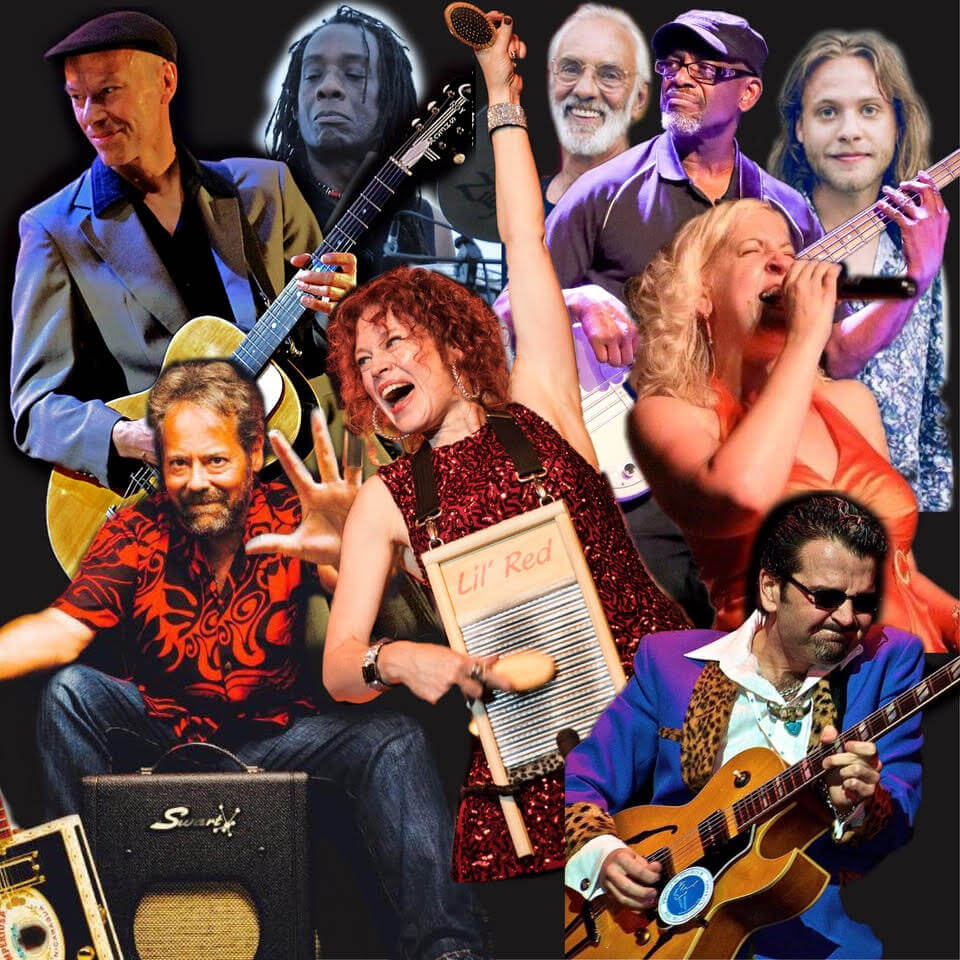 Lil’ Red & The Rooster, along with special guests Long Tall Deb & Colin John, Troubled Waters, and Sean Carney, present the International Blues Challenge FUNdraiser! Every January, a chilly Memphis hosts the International Blues Challenge, with 100 bands and 90 solo/duo performers who’ve won a local challenge around the world gather to compete. Only nine bands and eight solo/duos performers advance to the finals. It’s a prestigious event that not only opens doors for musicians, but is also great for Columbus! However…it’s pricy. The Blues Associations help, but it doesn’t come close to covering travel costs. So…it’s FUNdraiser time!

In 2019, Lil’ Red & The Rooster made it all the way to the finals and are headed back this year representing the Cincy Blues Society backed by their Columbus combo: Dwight Cartier on bass and The Governor on drums. Pascal Fouquet’s feather’s are ruffled and he’s ready to crow! Also, representing Cincy Blues is Troubled Waters a deep roots father and son duo who will be coming up from Cincinnati to share their blues with you.

Hold on…we ain’t done yet! We have the top notch power house duo of Long Tall Deb & Colin John and finally, 2007 IBC Winner Sean Carney sweetening the night as a guest. All proceeds from this event will go to the competing musicians travel expenses, all of whom greatly appreciate your love and support!

Lil’ Red & The Rooster (Cincy Blues Society): Jennifer “Lil’ Red” Milligan, with bite, humor and a contagious smile, sings, scratches and shakes all that makes her soul burn. Since 2010, she’s been writing and touring the globe with Pascal Fouquet, a classy, true blues guitarist with a style all his own. Last year they were finalists (duo) and are thrilled to return backed by the “Columbus Combo,” who swing a deep groove to deliver you high energy, guitar-driven blues. They’re warm and inviting and their music has a refreshing spirit of hope and joy that may inspire you to get up and boogie!

Long Tall Deb & Colin John (Windy Blues Society): Vocalist Long Tall Deb and guitarist and vocalist Colin John have crafted a sound which pushes the blues genre forward while paying deep respect to the blues icons who paved the way. Their sound incorporates a bedrock of Chicago blues sensibilities cross-pollinated with their respective deep roots in Texas and Hawai’i, topped with world roots influences gleaned from their travels around the globe. They have performed across Asia, Europe, North America and the Pacific and continue to perform internationally and license their songs in TV and film. https://www.longtalldeb.com   https://www.facebook.com/longtalldebandcolinjohn/

Troubled Waters (Cincy Blues Society): Joe and Jack Waters formed their duo when Joe was five years old, he played harp to his dad’s resonator guitar at the Trolley Stop in Dayton, OH. For the past 17 years the father and son duo have played at various bars, festivals, night clubs and house parties. This is their third time at the IBC, before representing Columbus. They feel that tradition is very important and combine this with a wide variety of blues styles. These two have been involved with blues for a while now and have every intention of keeping the blues alive!   https://www.facebook.com/h20troubledwaters/

Sean Carney – 2007 IBC Award Winner! An internationally known bluesman, Sean Carney is entering his third decade as a professional blues guitarist and vocalist. He is a noteworthy, sophisticated master of tone and taste with a broad appreciation for the music before him and around him and a knack for turning out interesting songs.   http://www.seancarneyblues.com/   https://www.facebook.com/seancarneyband/