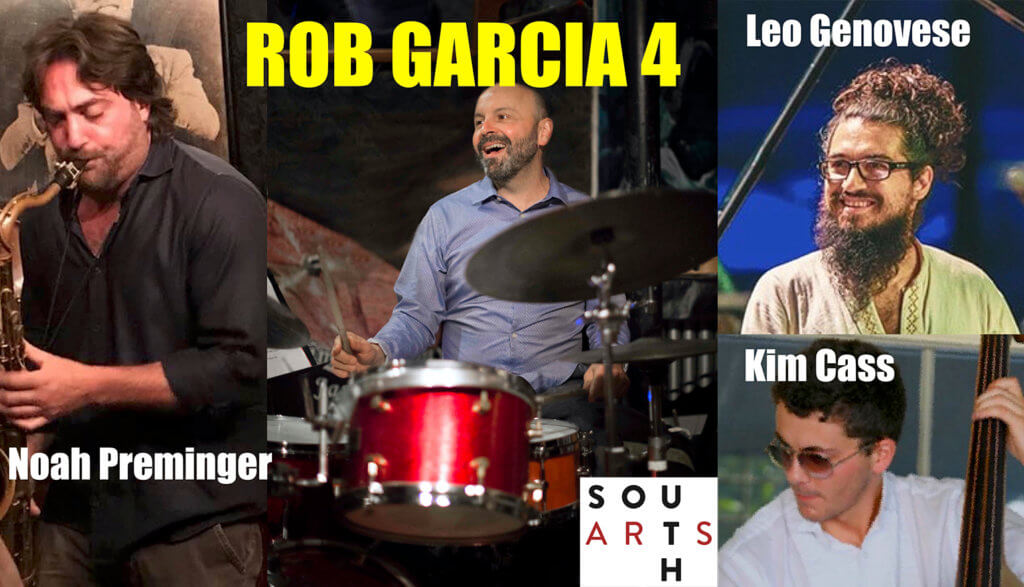 Rob Garcia 4 is a working group that has been, “among the vanguard of modern jazz” (The NYC Jazz Record) since 2009. Garcia has led them through performances at major venues and festivals around the world. The group has released 5 critically acclaimed albums, 4 albums on Brooklyn Jazz Underground Records and 1 on Fresh Sound Records. Garcia continues to compose and arrange new material for the group keeping the energy fresh and inspired.

“A prime mover in the current Brooklyn jazz scene” (Time Out-New York) and “one of New York’s great jazz drummers and composers.” (Capital New York), Rob Garcia continues to be a strong presence in the New York and international jazz scene as a sideman and bandleader. He has collaborated with such stellar artists as Joe Lovano, Sheila Jordan, Dave Liebman, Wynton Marsalis, Diana Krall, Myra Melford, Joseph Jarman, Kris Davis, Anat Cohen, Vince Giordano, Reggie Workman and Wycliffe Gordon. He has played on over 70 albums including Grammy winners.

Rob has released 8 critically acclaimed albums as a bandleader and 5 as a co-leader which feature such artists as Joe Lovano, Noah Preminger, Kate McGarry, Dan Tepfer, John O’Gallagher, Gary Versace, Joe Martin, John Hebert, Dave Kikoski and Mike Formanek. His most recent album “Illumination” was released on Fresh Sound Records in December 2020. His albums have been on “top albums of the year” lists and have received praise from publications such as Downbeat, The New York Times, Jazz Times, and Time Out New York.

Rob has also been a major force in artist-run jazz organizations. He is the founder and artistic director of Connection Works, a member of the Brooklyn Jazz Underground and a founding member of the Douglass Street Music Collective.

This performance/tour is made possible with the support of Jazz Road, a national initiative of South Arts, which is funded by the Doris Duke Charitable Foundation with additional support from The Andrew W. Mellon Foundation.