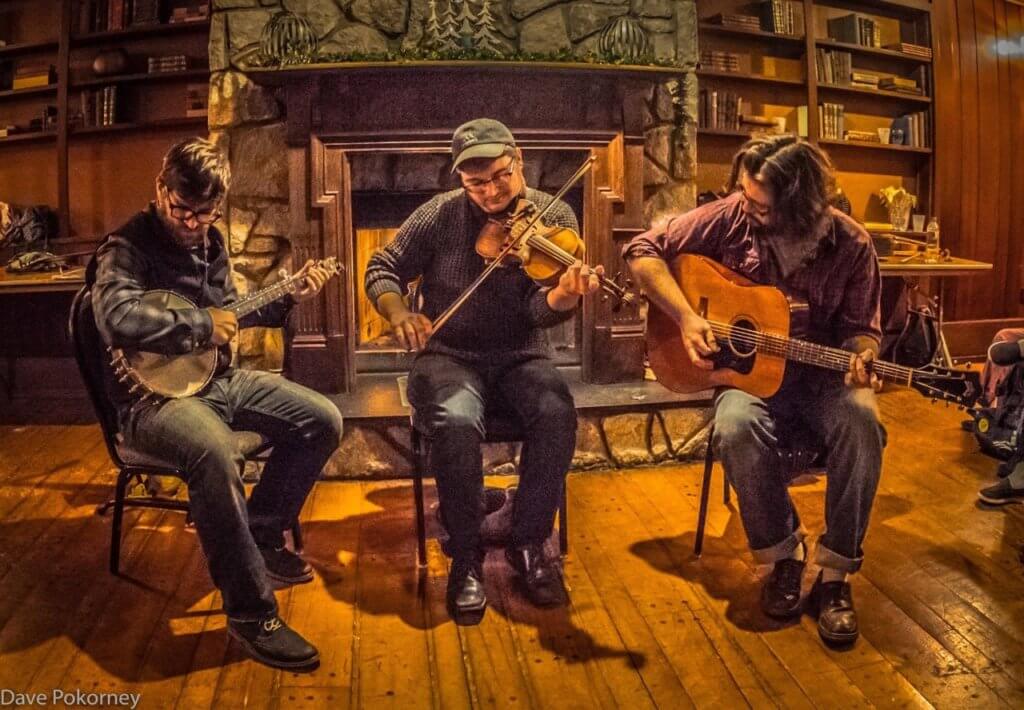 The Faux Paws, along with special guests Adam Schlenker and Hayes Griffin, take the stage at Natalie’s.From raging fiddle tunes, to saxophone solos and unrequited love songs, the music of The Faux Paws would be hard to pin down with standard genre descriptions.  The trio’s contagious groove, and feel-good melting pot folk music has been honed over ten years of playing together, and is the sound of three close friends (two of which happen to be brothers), who feel a musical kinship that transcends any stylistic limitations.   Now, after nearly a decade of music making, the bi-coastal trio are releasing their self-titled debut album “The Faux Paws”

Brothers Andrew and Noah VanNorstrand grew up playing contra dance music with their musician mother in the band Great Bear. Chris Miller grew up in Florida, and he was enamored with bluegrass, and studied jazz before going on to play with GRAMMY nominated Cajun-country band The Revelers.  Since meeting in 2012, the trio have toured across North America several times, sometimes under the name The Faux Paws, sometimes as part of other larger ensembles.   But due to their commitments to other bands and musical projects, the timing was never right to focus on making The Faux Paws a priority.  Instead, they took their time learning about different styles of music from one another and finding where their interests and skills could create unexpected and exciting new sounds. “I love super glossy pop music, and Chris is always pushing more of a jazz influence” says Noah.. “But we all have a strong background in dance music, so almost everything we do has rhythm and groove, and is based around hook and feel”.

It may have taken The Faux Paws ten years to make their debut album, but those years have clearly not gone to waste.  Now, with an experimental but cohesive vision, the trio brings together seemingly unrelated musical elements into one joyful and distinctive collection, deeply rooted in the raw humanity of folk dance and music traditions.

Adam Schlenker & Hayes Griffin will perform an opening set…Griffin is a multi-instrumentalist and music educator who has over a decade’s worth of experience touring with acts like Canadian fiddler April Verch and progressive bluegrass band Newtown, and Schlenker is an educator, performer, composer and arranger of Acoustic American Roots Music, and is the Coordinator of American Roots & Bluegrass Music Studies at Denison University. Adam strives to develop music that reflects his influences while attempting to keep the music moving forward.